My obituary for William Watkins, my organ teacher from 1967 to 1972, which was published in the November 2004 issue of The American Organist:

William Watkins, AAGO, 82 years old, June 17, 2004, at Washington Hospice in Washington, D. C., of acute respiratory failure.  An honorary life member of all three Washington-area AGO chapters, Mr. Watkins was director of music and organist at Georgetown Presbyterian Church in Washington, D. C., from 1956 to 1997.  He held the position of director of music emeritus until his death.  William Watkins was born and raised in Danville, Va.  He began his academic music studies in 1941 at the Peabody Conservatory in Baltimore, Md.  After a break in his studies, when he served as a chaplain’s assistant in the U. S. Army, he returned to Peabody, where he was a pupil of Virgil Fox.  There he received the artist’s diploma, at that time awarded to only 18 students in the history of the conservatory, which was founded in 1888.

While a student in Baltimore, he held his first church position at Washington’s First Congregational Church in 1945.  In 1948 he became organist at Washington’s New York Avenue Presbyterian Church, sharing his tenure with the well-known Scottish minister Peter Marshall, during which time large crowds filled the church at Sunday morning and evening services for the exceptional preaching and music.  During his eight years there he collaborated with G. Donald Harrison and Joseph S. Whiteford in rebuilding the church’s Skinner organ. 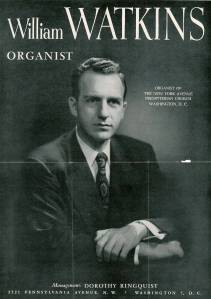 Publicity flyer from the early 1950s.

In 1949 Mr. Watkins’ career was launched after he competed in and won the Young Artists Award of the National Federation of Music Clubs, at the time the most prestigious music competition in the U. S.  The first organist to win the competition, Mr. Watkins played Leo Sowerby’s then new Sonatina.  This was the beginning of a life-long association with Sowerby’s music, culminating in his receiving a lifetime achievement and appreciation award from the Leo Sowerby Foundation in 1996 during the AGO National Convention in New York City.  He played solo recitals for national and regional conventions of the AGO, and was a judge for the 1956 National Organ Playing Competition.  He was the first organist to perform with the Dallas Symphony, the first organist to play in the Art Institute of Chicago, and the first organist to perform in the National Gallery of Art in Washington, D. C.  His solo career was curtailed in late 1951 as a result of injuries he sustained in an automobile accident.

In the early 1950s he began a noted teaching career that continued until his death.  Many of his students have won competitions and developed careers of their own in churches and academic institutions.  At various times he also taught organ at the Washington Musical Institute, the University of Maryland, and Catholic University of America.  He recorded for the Aeolian-Skinner “King of Instruments” series, McIntosh Records, and Washington Records.  Mr. Watkins’ professional career culminated as director of music and organist at Georgetown Presbyterian church in Washington.  Shortly after his appointment  he collaborated with Joseph S. Whiteford on the construction of a new 19-rank Aeolian-Skinner organ of unusual design, which he described in a brochure as “not large but extraordinarily resourceful . . . absolutely stunning for its capability, its flexibility, its variety, and its tonal beauty.”  With the new organ and the restoration of the historic building and its good acoustics, Mr. Watkins established the church as an important venue for choral and organ music in the oldest Presbyterian congregation in the nation’s capital.  He oversaw several additions to the organ over the years.

William Watkins leaves many devoted students upon whose lives he left an indelible mark through his artistry, devoted friendship, humility, and his love of the Aeolian-Skinner organ.  A memorial service and interment took place at Georgetown Presbyterian Church.  A musical memorial tribute is scheduled at the church on April 2, 2005.

With Bill Watkins with Lorenz Maycher, 1995.